According to the Greek Myth, God Zeus bewildered the young woman Mnemosyne and slept with her for nine consecutive nights. The result of their encounter was the Nine Muses. The Muses were believed to live on Mount Olympus, where they entertained the Olympian Gods with their artistry. The theme of their songs was the praise of noble gods and mostly the majesty of Zeus. The muses were called the “Olympians” and their leader was Apollo the Olympian God of sun, light, music and poetry. The Muses brought to the common people the comfort of art and morality as they represent the beauty of all arts.

Calliope, the Muse of heroic or epic poetry.

Clio, the Muse of history.

Erato, the Muse of lyric poetry.

Euterpe, the Muse of music.

Melpomene, the Muse of tragedy.

Polyhymnia, the Muse of sacred poetry.

Terpsichore, the Muse of dance and choral song.

Thalia, the Muse of comedy and idyllic poetry.

Urania, the Muse of astronomy. 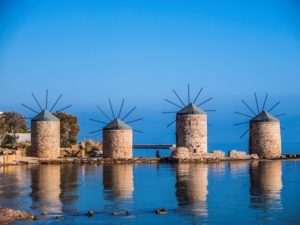 A mastic-scented island with fascinating history

Much as Chios is famous for its mastic, it is not the only “magic” one can find on this island. Alongside its rich history starting from the Neolithic Age and including adventures with Saracene pirates and the Turks during the Greek Revolution, Chios also claims to be the birthplace of Homer. It was certainly the birthplace of eminent Greek politicians and writers such as Adamantios Korais, Emmanouil Roidis and Alexandre Mavrokordatos.

Discover the town of Chios

Built on the east coast of Greek Island facing Ionia, a region of Asia Minor, the town is proof of the maritime glory and aristocratic nature of the island.

Call in at the Naval Museum and see accurate replicas of sailing ships and steamboats. Walk through the picturesque narrow streets of Kaloplitis and marvel at the ship owners’ mansions, and go all the way on to Tampákika, where you can see the majestic mills of the old tanneries and Ioustiniani Palace.

A medieval treasure hidden on the island of Chios

Discover Mestá, the famous traditional medieval settlement on the south-western part of Chios!

Upon entering the gateway of the castle, the “Door of the Captain”, you will sense the awe-inspiring atmosphere of this medieval village, which was built during the Genoese domination, and is a model of defensive architecture. Admire the three preserved castle towers, the ancient churches and the magnificent stone houses which are tightly joined together with arches. Since all the roofs are interconnected, you can actually cross the whole town walking on the roofs without reaching the ground! Mestá was built in a maze pattern for defensive reasons: the enemies, even if they managed to get into the castle, got lost in the mazy dead-ends, and thereby easily defeated by the locals. Take a romantic stroll along the narrow winding streets that lead to the central square, the so-called “Livádi”, the only open area of the castle. There you can enjoy delicious dishes cooked with famous Chios products, such as mastic, or have a sip of soumáda, a traditional drink made of almonds. Just don’t hesitate: travel back in time to a place where childhood fairytales of knights in shining armour, and beautiful princesses become real!

The most famous local product is mastic.

Known throughout the world, mastic is an appellation d’origine contrôlée (= controlled designation of origin) product growing only in the South of Chios, where it has been raised since the 8th-7th century A.D. This natural product is cultivated entirely by hand and is nowadays used in medicine, pharmacy, dentistry and cosmetics. At the central market of the town of Chios, you can buy mastic-based jams and sweets, brandies and, of course, local delicious ouzo!